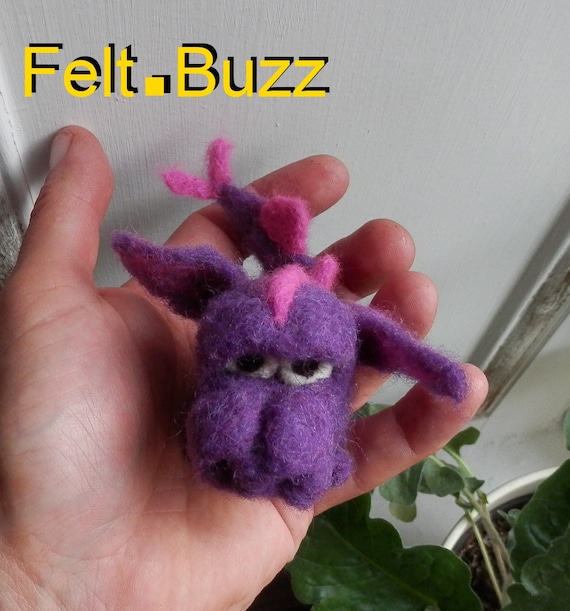 This dragon is available in my Etsy shop. He is well trained. You can carry him in your pocket and he won’t set fire to your trousers. Fact.

Warning: Dragons are NOT toys.

Perhaps I need to get out much (there really isn’t a lot to do, of an evening, in winter in rural France), but once I got the idea of making a dragon that could sit on your shoulder like the one Khalissi has in Game of Thrones I couldn’ stop. Not entirely sure how many hours it took, but I made it over a week.

I first made a wire frame out of some electrical wire I had hanging about. I used a glue gun to fix the wire, where it connected with other bits of wire.

I then began the process of putting some “flesh” on the bones. I started by wrapping wool around the wire. I figured that this would make it easier when trying to needle-felt – give the wool something to hang onto!

You can see in the above photo that I had also began to needle felt the head. It was then just a case of adding more wool and needle felting it until it began to look more like a dragon.

Once I had built up the body I made some wet felted sheets for the wings. I used two different types of red and did three very fine layers (a bright red, sandwiched between two dark layers).

It was around this point I attached three magnets to the dragon. One on each foot, and one on the tip of his tail. I attached the magnets using a glue gun, and then needle-felted over them.

It was then a case of adding colour and detail until I was happy with it.

Like our page on Facebook for more cool stuff. If you want to own a dragon why not email me?

If you like this you may want to check out our shops on Etsy and alittlemarket.com

Here is an example of how looking at other peoples work can make you think, and give you inspiration.

I recently saw this picture from Elemental Sight I was really impressed with the needle felting, but also impressed that the owl had “a magnet up it’s butt” to help it sit on her shoulder.

And then suddenly another image leapt into my head:

Which then had me itching to do some more needle-felting. This is what I came up with (I was clearly surprised!):

He has three magnets, one on each foot and one on his tail for stability. Will post more photos tomorrow of how it was done.